Post-digital provocations #3: 'in response to' the digital

In the previous two posts I talked about the digital 'mode of knowledge production' and the kinds of change it has brought about in educational relationships and practice. I argued that changes to the contexts of learning affect learners' relationships to their institutions and to each other and to us as educators. That changes in theory and method in academic practice, and in the content of curricula and in what is expected of graduates, are all influencing how we come to know things and to value what we know. I summarised these changes as generally making knowledge more fluid, and situations of learning more porous or 'leaky'. And I considered how traces of learning and development are easier to make and more persistent, both in the kind of records that learners make themselves and in the data trails that organisations (educational and commercial) make of them. A recent Times Higher article, for example, shows that academics and students alike are waking up to the implications of learner analytics for the relationships between students and institutions.

There are changes that I think time has shown to be less profound. The interactivity of digital media would for me be one, or the different terms used for independent learning when digital technologies are involved, though these have at various moments in the digital 'wave' seemed essential to its forward momentum. In my slides I also cautioned against substituting developments in digital technologies for political engagement with issues of equality and power, in the belief that entities such as 'the internet' or practices such as 'open sharing' necessarily entail more equal access to learning opportunity or more democratic institutions.

In this post I want to consider our response to digital transformations, and to do that in two moods, though I don't see them as distinct. One is an intellectual response or critique, and  the other is a felt response to the experience of living/teaching/learning in a world saturated with digital technologies. I wasn't originally planning to bring the second kind of response so fully into view, but a recent keynote by Audrey Watters at the ALT conference, followed by a seminar with Bonnie Stewart as part of the #scholar14 MOOC, have convinced me that it is necessary. That is, we must acknowledge our own feelings including fear, vulnerability, boredom and compulsion in relation to digital technology if we are to support students and staff in the same space. We must practice rigorous critique of the technologies we are offered to use, but also speak from our consciences and hearts, especially when we experience digital spaces being colonised by values that are antithetical to educational (and human) development.

My second set of slides is now available on slideshare. In the following slide I am wondering aloud what it feels like to think/act/be in online spaces that are simultaneously private and public, that are porous in ways we might not feel we have consented to. There is no one response, and one of the points I am making is that this feels very different depending on whether you are a man or a woman, from the global north or south, digitally and/or educationally empowered or not, and in other very personal ways. 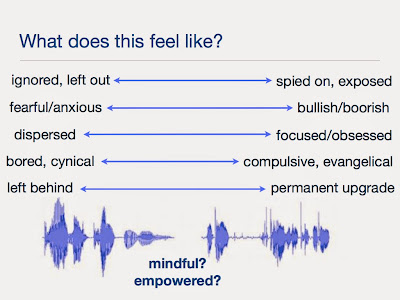 For each of these there are negative feelings associated with either end of the axis. There is of course a middle ground where we are thoughtful, balanced, in control of our relationship with technology. Where I might feel (for example) neither fearful of interacting online, nor liable to behave disrespectfully to others. However, increasingly I seem to be able to experience both negative ends of the spectrum at the same time. In writing this keynote, for example, I am working obsessively on my slides, using Keynote and Google advanced image search, and cycling between them like my daughter's hamster on its little mouse wheel. I've just noticed that it's after midnight and I probably haven't got up from the laptop in three hours. At the same time I feel ungrounded and dispersed through the various media I am using and through the different sources I have open. I am slightly in despair at the impossible task of keeping up with all the exciting people who are blogging in this area (see my blogs to watch on the right). I also feel some guilt that I am dipping into various online discussions in order to snatch at what is useful to me immediately, rather than making my own stance visible or committing to participate over time. 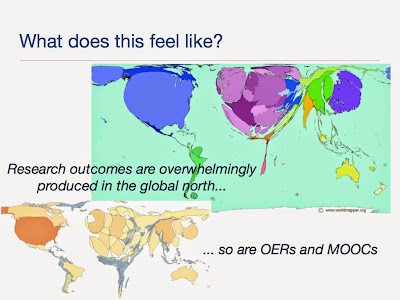 I have hardly made myself vulnerable through this confession and I feel lucky that I participate online as regularly as I do without (yet) meeting with any significant abuse or trolling. But I see that many many women do experience this, from below the line responses to female columnists such as Hadley Freeman in the Guardian, to the reaction Audrey Watter received when she posted that 'Gamergate is an EdTech issue' on Hack Education. And in similar vein I understand that participating online, especially in academic spaces, feels very different if you are not English, not from the global North, not from an elite institution such as most UK universities (in a global context) are, not from a particular educational culture, not physically able, not digitally able, not a 'proper' student, (not a 'proper' academic)... Maha Bali's blog is an upbeat but sobering read on many of these issues.

So, as Bonnie Stewart has argued, we need to take care of each other in digital spaces, recognising that they engender vulnerabilities as well as opportunities. How much truer that is when the others are our students. In my final provocation tomorrow I will ask how we might recover from digital fall-out, and help our students to recover too, in ways that make us all more resilient.
Posted by HelenB at 13:36

Helen, this is an enlightening post. I see so many feelings I share in it. How can we educate others (young and old) when we ourselves feel not in control?

Worse is the struggle within, where I would like to take full benefit from technology, but at the same moment hesitate to not being dependent, exposed, vulnerable, etc.
Wolfgang

Global Incorporate involves researched and knowledgeable infromation which enhaces the facts of Digital Marketing. It highlights on the key aspects of the Digital World together with SEO and Social Media Strategies.

Really i found this article more informative, thanks for sharing this article.
website designing company in gurgaon

good information and very use full for every one BOXFinity a Web designing company in Hyderabad creates websites with creative & professional approach. whatever your website is ?static ?dynamic ?responsive.


we build portrays your business effectively in the market. We utilise the World Class Technologies to give you the outstanding and most reputed digital asset.Getting online is easy. Succeeding online is a different story. You’ll need more than just a beautiful website to stand out these days. Online marketing solutions. Conversion-based web design coupled with a lead generating marketing plan, your online success is inevitable.

On their own, My own loved one and also i find do not bought genuine merchandise see cloak. I truly do on the other hand figure out how difficult can browbeat these kinds of unmarked. Encourage an individual pertaining to speaking about info about methods to quickly milestone this kind of enormous selection. Website Los Angeles

life is about learning by the base of concept we provide studela. for the learning people it is very useful one. In studela we provide a video for maths coaching, science projects,bank exam, IAS exam,TNPSC group exam,RRB exam, other compatative exam, kids learning videos and some technology videos are availabe. watch more videos get your view smart

This blog sharing information about the digital mode of knowledge production, Your article is very nice thank you for share this information.
Website Development Company

Thanks for sharing this information. It is very useful to our site. Are you searching the best mobile apps development and consulting service at affordable price. Our company is the best choice for you.
For any details Ecommerce Consulting Company in Houston

Nice Post!! I am looking for this kind of posts from last many days. thanks for share it with us seo company india

Great Article. Thank you for sharing! Really an awesome post for every one.

IEEE Final Year projects Project Centers in Chennai are consistently sought after. Final Year Students Projects take a shot at them to improve their aptitudes, while specialists like the enjoyment in interfering with innovation. For experts, it's an alternate ball game through and through. Smaller than expected IEEE Final Year project centers ground for all fragments of CSE & IT engineers hoping to assemble. Final Year Project Domains for IT It gives you tips and rules that is progressively critical to consider while choosing any final year project point.

If you are business owner so it may be alert massage for you that world is moving towards online quickly you should create your website for your business to boost your online presence. What you thinking its not a time to delay more get now custom website design boca raton
only at LogoForWork

Thanks for sharing this digital marketing company related post. It was very interesting to read a blogpost.

Thank you and good luck with the upcoming posts.


Extremely interesting. Thank you for giving such an informative blog.

HelenB
I've been working in e-learning for nearly 15 years now. It's something I fell into one day and haven't yet found my way out of. This blog is for occasional explorations of the thicket.